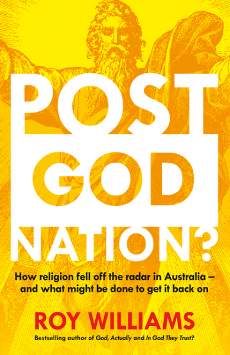 Roy Williams is already known for several books with the most popular being God Actually. In Post God Nation?, he has taken up the challenge of explaining what has happened to Australian society that today only a small percentage of people identify themselves as church attending Christians and why the Australian census continues to show a declining percentage of people identifying themselves as Christian.

His analysis is firstly historically and Part 1 of the book goes back before Australia was occupied by the British to consider the influences of Christianity and Christian people on the development of the nation. The detail is impressive and the referencing makes me wonder how a single person could read so much. If nothing else he is thorough.

The history of Australia is outlined as religious and the powerful impact of Christians is convincingly documented. Australia would not be the country it is today without the influence of Christians and Judaeo-Christianity.

In Part 2, Williams examines what he calls The Secular Juggernaut attacking the ignorance of Australians about their heritage which is fostered by the education system, outlining the negative effects of war and nationalism and examines the belief killers of scientism and prosperity. Throughout this analysis he is critical of the role the traditional churches have played and their inability to respond quickly to changes in Australian society.

Finally, Williams suggests some areas in which Christians might be able to reclaim some of the lost ground and ensure their relevance in the broader Australian community. This section while not as convincing as the historical analysis, is at least an attempt to address current issues proactively and not from the traditional reactionary positions of churches. Some additional contributions from similar forward thinking Christians would be a help to all Australians.

The book concludes with two appendices: Biographical sketches and key theological differences between Catholicism and Protestantism plus over fifty pages of references and end notes.