This is about a leader who is both thoroughly Christian and Aboriginal. Many teachers feel a need for an in depth description of an Aboriginal community and of how it may relate to Christianity and missionaries. An important new biography of an outstanding Aboriginal Christian leader has been published, 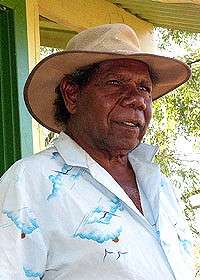 Gumbuli of Ngukurr: Aboriginal Elder in Arnhem Land (Acorn Press) by Murray Seiffert. This 360 page book is a rich source of information about Gumbuli growing up in a remote Aboriginal community on the Roper River and it describes the challenges that arose when Aboriginal ways met Western culture and the Christian faith.

For teaching Aboriginal Studies it provides specific information relevant to the Heritage and Identity topic and especially for fleshing out the point “effect of Christianity and other religions on Aboriginal social systems”.

Michael Gumbuli Wurramara AM grew up in a remote community on the Roper River where a church had been established since 1908. There he became a Christian as a child and developed into one of the community leaders who fought hard to achieve local decision-making at a difficult time of dramatic change in the 1960s. He became the first Aboriginal Anglican priest in the Northern Territory and has been a key peacemaker and role model for more than 40 years.

His biographer, Murray Seiffert, has multiple degrees and has spent years training Aboriginal Christians in Nungalinya College in Darwin. Murray Seiffert’s background in the social sciences provides us with a valuable introduction to the community-based culture of indigenous people and includes many enlightening photos. So, in reading this book, non-indigenous Australian need to stretch their imaginations to grasp something of a very different way of life in which relationships are so much more important. Many Christians wonder if Christian beliefs are compatible with traditional indigenous ceremonies. Others allege that missionaries destroyed the native culture. Seiffert’s book gives a “white fella” like me rich insights into how the Aboriginal Christians worked out their own solutions to problems that only they could fully understand, with Gumbuli playing a significant leadership role.

Missionaries have been criticised for doing more harm than good. Seiffert helps provide a fairer assessment of the efforts of this mission. He describes, for example, how a cash economy was introduced to the traditional Ngukurr community in the 1960s. Seiffert documents how it was the mission, CMS, that originated this innovation. It was the missionaries who trained Aboriginals in budgeting and handling their own money and in catering and preparing healthy meals.(p.172) It was the missionaries who from the beginning had given the people significant skills in English literacy and numeracy and built up skills in mechanics and building trades. “They did not see the role of the mission as training men and women to be servants of the white settlers.” (p.118)

Seiffert has passed on a telling example of the character of Christian missionaries provided long ago by Macassan sailors who came down to the Gulf of Carpentaria for fishing, well before European settlement. A Christian elder on Elcho Island, Burramurra, recalled his father’s account of what these Muslims had told him about Europeans:

“There were two types of Balanda [Europeans]. One had a gun, the other had a book. The one with the book could be trusted, they said. Also there was a story … of a man who lived in the sky, who had a wooden cross. The Macassans did not know who he was but they said he was good and that he was coming this way and that the [Aboriginals] should keep their eye out for him.” (p.19)

This biography is based on extensive interviews, observation as and archival research. It challenges many of the assumptions about relationships between governments, missions and Aboriginal people.

Murray Seiffert has also published a short book Refuge on the Roper: The Origins of the Roper River Mission-Ngukkurr (Acorn:2008) with 28 photos which would provide a helpful introduction to the Ngukurr community before reading his 360 page biography of Gumbuli. Both books can be ordered from Pilgrim Books.