What did I learn?: Seven years involvement with schools in India.

In 2007, Elizabeth and I responded to an invitation by Operation Mobilisation to visit and teach in one of their developing schools targeting Dalit children, those children of Indian families considered to be either “untouchables” or tribal. For years, the Indian system had discriminated against these groups by only providing education in the local language precluding them from access to tertiary education, which is mainly in English. Discrimination was further evident in the attendance rates and retention rates for these students. For example based on enrolment statistics, a tribal girl had only a one percent chance of reaching the end of Grade 10. To address this problem, Operation Mobilisation, known in India as, Operation Mercy (OM) was establishing 100 English medium schools for these students located in slums and remote rural areas across India.

What follows is a fairly depressing picture, so I want to qualify it by acknowledging that amongst the chaos there are OM schools that have got it right. They have focussed on English, teachers have changed their style of teaching, large numbers of students have reached and graduated from 10th Grade and these Dalit students have gone on to complete junior college (Grades 11 and 12) and been accepted into university courses on merit and some have now graduated. But in general terms:

In schools across India students learn by rote. The textbook is the curriculum, often published by the state, and learning it is essential to pass the examinations which are geared to favour those with good memories. Understanding is not important, being able to answer the question with a predetermined answer is everything. Lessons could comprise a teacher writing the questions and answers on the blackboard and having the students copy them and memorise them. In examinations in mathematics and science where students have to demonstrate some understanding to answer problems, failure rates are high often over 50%.

In English medium schools, teachers mix English with the local language “to help the students understand” and their lack of English inhibits access to all subjects and contributes to huge failure rates at Grade 10. By not immersing students in English they deny them an English education, except the very bright students who can learn in any situation. Success in an English medium school is directly correlated with the ability of student to speak, and write in English.

The ability of schools to keep their students is poor. Firstly, the students themselves come from families where parents have not attended school or had just a few years of schooling. They want their children to go to school but don’t understand the importance of regular attendance and perseverance. Girls often leave school from 5th Grade to do home duties and boys from 7th Grade to find work. While poverty influences these decisions, parents, as yet, do not sufficiently value education to be able to sustain student progress. In northern India, by 10th Grade it is common in these schools for Dalit students to have only five or six students remain from an initial intake of fifty. In South India retention is better.

Also of concern is the attitude of teachers who accept the drop-out rates. Students not coping with the demands of schooling are not encouraged to remain. Their attendance gets worse, they are unable to cope because of the work they have missed and are effectively forced out of schooling. The individual does not have the value that is given to each person in western countries. Even Christian teachers do not fight to keep students at school and are happy to teach the few bright ones that remain. Retention is not a priority. This problem also exists in the government schools and only in some high fee paying schools is retention considered an issue, mainly to secure an income flow.

The teachers employed by OM are poorly trained, if at all, and adhere to traditional rote teaching which is all they know. The typical teacher has a university degree where study may have been in English or at worse they may have only English as a subject to 10th Grade. They have no teacher training like a Dip. Ed. or B. Ed. With this background they teach all primary subjects and can get some teaching in specialist areas once the school goes to Grades 7 to 10. They are poorly paid and receive only half or less the salary that a government school teach receives. They aspire to be employed into a government school and so teacher attrition is high.

As a Christian organisation, OM has a long tradition of its staff being sponsored or giving up salary to do God’s work. But when you start 100 schools there are not the Christian “missionary” teachers to meet the demand. In this lies another problem. As the schools expand, there is pressure to accept more and more teachers who do not hold Christian beliefs. Mainly Hindu in background, they have to fit into the school culture and must in some ways change it.

Principals are also poorly equipped to take on the role, although OM is putting some resources into their training. An additional problem is that the schools have a manager who starts the school and manages it development. A principal is not appointed until the school reaches about 5th Grade. Most managers have no educational background and the school develops by compounding the experiences of the teachers employed. When a principal is appointed, it is likely that the manager chooses someone that will not threaten his control. Principals struggle to exert any educational authority and bring about changes that they themselves don’t understand. 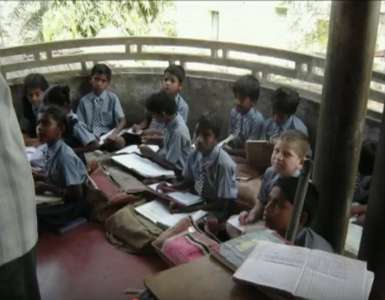 OM has been focused on buying land, constructing buildings and paying teachers. The textbook is the only resource in most schools. Where sponsors have provided additional resources like maps, charts, atlases, science equipment and chemicals they have been largely ignored. If rote learning is all you need to pass exams why bother with other student centred strategies involving resources.

As English medium schools, it is difficult to accept students into the school past 1st Grade unless they have been taught in English. This means that as the classes lose students it is hard to replace them. To counter this problem, fifty to sixty students are accepted into a kindergarten classes and the least qualified teacher given to that class. In most schools there is a Lower and an Upper Kindergarten with students commencing at three and half years in some cases. Often the learning, including English is negligible by the commencement of 1st Grade.

To address the issues posed by a large number of schools being developed quickly, OM has applied a western business model to improve efficiency and to give a stronger financial basis for its work. While remaining dependent on overseas donations and a child sponsorship program, it has increased the fee structure of its schools moving from token fees to substantial amounts for their clients who are mainly from very poor backgrounds. A result has been a loss of students and they don’t seem to understand the “total revenue” effect of fee increases. Significant people have also been lost by restructuring positions and resignation and problems compounded by the government expanding their English medium schools, sometimes in the drawing areas of the OM schools. The current national and some state governments are very inclined to act in ways that make registration of schools run by Christian organisations difficult and to deliberately start non-fee paying government schools as opposition.

The Indian government is in the process of implementing access to education for students to the end of 8th Grade. There is a national curriculum which encourages student-centred teaching and examinations that require understanding, but it is not compulsory and schools have to apply to do it. 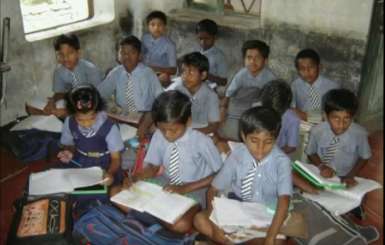 Schools are being built and teachers are being employed. But there remain issues of quality for both the government and private schools of India.

There are still millions of students who are not attending school at all, retention is a huge issue especially for girls who face barriers founded in the attitude to the girl child which is firmly entrenched in the Hindu religion. Until the 0-6 sex ratio improves to reflect changing attitudes, it is hard to believe that girls are going to get the education they deserve.